You are here: Things to Do > Sannidal Church Stave Church
There had been a church in Sannidal way back in the 1200s. This stave church was located at the little hill, south of the now existing church. The stave church was dedicated to St. Laurentius, a Roman deacon who led the martyr death at the stake under the persecution of Christians under Emperor Valerian in 258 A.D.

Several objects from the old stave church are found in Sannidal Church today, for example, a lot of the old plank is used in the floor and the roof. We also find valuable objects at the Norwegian Museum of Cultural History (Norsk Folkemuseum) in Oslo, where also the pulpit and the altarpiece are displayed in the church collections.

Norwegians had also built stave constructions earlier. Stave churches come with Christianity. There are 31 of 750 original stave churches remaining in Norway today. It is natural to guess that in heathen period lay a gudehov (heathen temple) here before the stave church.

Bishop Eystein The Red Book
The first time the church was mentioned in a preserved document, was in Bishop Eystein's jordebok (land register), "den røde bok" from 1398. He worked for straightening things out in administration due to the declining economy of the church. Under his visitation trips, he collected information for making a complete list of all of what the church owned in Oslo diocese. It was mentioned as "Moo kirkia i Sandhauka dale". Eystein Aslaksson was bishop in Oslo from 1385. This book got a red cover in the 1500s, therefore it's called "den røde bok - The Red Book". The stave church was located at the farm property of Mr. Mo. Such farms, with uncomplicated names that describe the relationships to the nature, are the oldest in villages.

Weaponhouse
The weaponhouse (church porch) was restored for the anniversary year 1972, after proposal from Directorate for Cultural Heritage. Here we find display of a grave plate moulded at Mørland iron factory in Kjølebrønd, the only visible one left from there. This iron factory was in business from 1641 - 1665. The grave plate is from 1643, and we see "Anna Krefting" written on it. It was probably the wife of Herman Krefting, who ran the iron factory during it`s last years.

The door of the stave church hangs on the south wall, and the old portals are on the side of the door of the church room. A little sward that was used for protection at the road to the church is also hung up at the south wall, and it reminds us about the proper usage of a weaponhouse in the period when people needed to protect themselves at church roads. Weapons were prohibited to carry into the house of God. It was important to note that sheath knifes was not a weapon in Sannidal, but a high valued tool. A true Sannidalian carried a sheath knife with pride. Many good knife makers are coming from this place.

At the south wall we also find pictures of our recent priests. Torkell A. Tande, the vicar who worked the longest here in Sannidal, was also a member of the Norwegian Parliament in several years.

The church room
The pulpit is a gift from Knut Knutsen Dobbe in 1884. It was first made in 1800s in a late Luis 16th style with antique connection. It has rosettes and rows of pearls, and was curved by Peder Olsen, who was "shape-cutter" first at Bolvik factory in Bamble, after that at Froland factory and also at Egelands iron factory.

The baptism bowl, which still is in use, was from the stave church. It has probably come from Gotland in the 1200s. It is made of soapstone.

Traffic of sailing ships has been important for Sannidal for a long time, especially when people exported timbers to Holland and England. The ship hanging in the church reminds us about it. It is worth to note that it is a battleship with cannons ready to fight for Christ.

Altar
Silverware from the altar of the stave church has been locked up today. It is of course very valuable, and some of them have their own histories. A beautiful, oval bread box made of silver was given as a gift to the stave church as appreciation for a miracle rescue of the ship "Patriachen Jacob" of Kragerø outside the Dutch coast in 1703. This history together with the name of the captain, Jakob Jensen, and the ship owner are curved. A silver wine pot was a gift from captain Olle Nielsøn and his sons, Niels and Jon Olesøn, together with 7 other people. It is an elegant Baroque work, with opening and handle made by goldsmith Ole Olsen in Kragerø in the first part of the 1700s.

The painting on the altarpiece came from the old Christi church in Kragerø when it was torn down in 1870. It is from the 1600s and portrays the salvation of the cross.

On the altar table, bible of Fredrik 2nd is lying. It was published in Copenhagen in 1589 with cover of brass mounting. It was at that time given by Niels Jensen Farsjø. 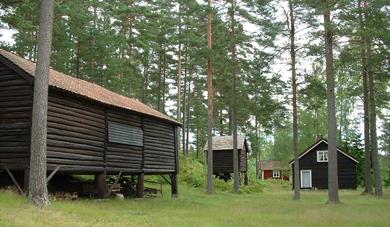 Sannidal Bygdetun, Kragerøis a local historic collection of buildings. Since 1949, eight buildings from 1700 and 1800s have been placed here: Millhouse, granary, storehouse,living room, farmhouse... . Experience this place by a guided tour?