You are here: Things to Do > Home of Myllarguten - Myllarheimen 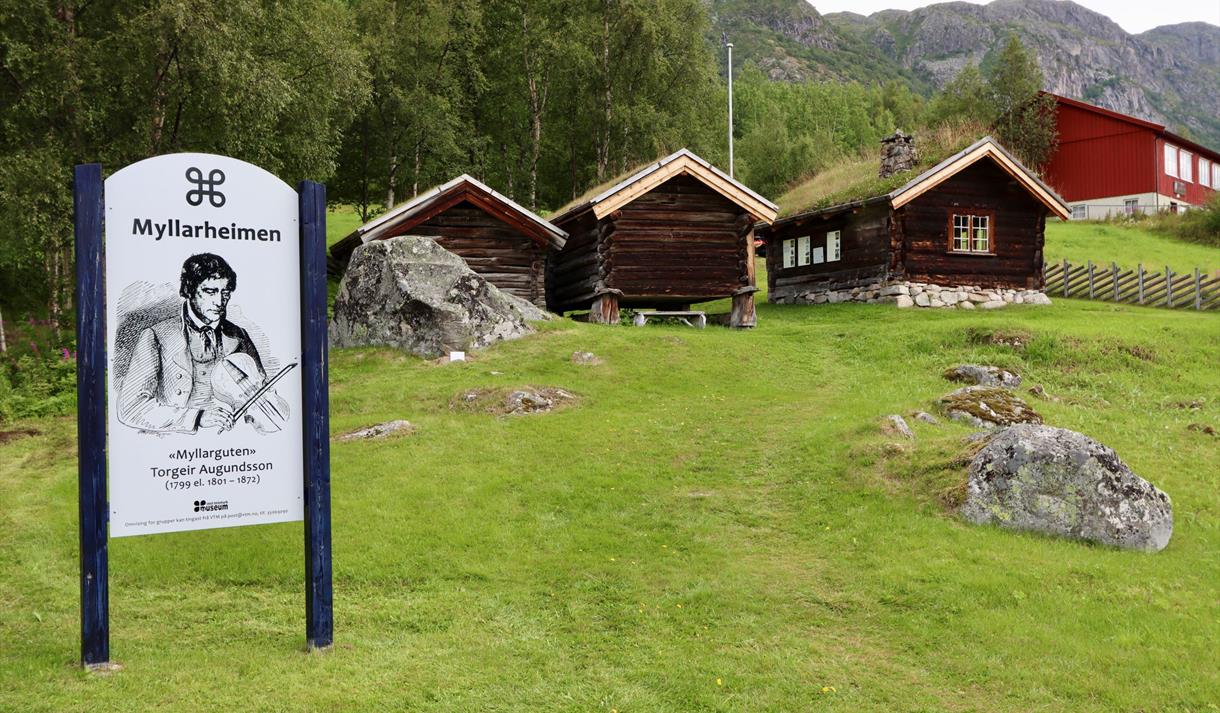 Myllarheimen in Arabygdi, Vinje, is the home of the artist and fiddler Torgeir Augundson (1801-1872), better known as Myllarguten. The smallholding Myllarheimen is where he lived the last years of his life.

Torgeir Augundson was born in Sauherad, and being a miller’s son he got the nickname Myllarguten (the millerboy). His family lived a wandering life in poverty. Already as a five year old Myllarguten started to play the fiddle, and after a while he became a popular fiddler at weddings and other gatherings. He traveled around playing, and got inspired by many skilled fiddlers he met on his way.

In Bergen in 1831 Myllarguten met the famous violinist Ole Bull, and Bull was highly impressed by his fiddling. In 1849 Bull arranged a concert in Kristiania (Oslo) with Myllarguten as the main attraction. The concert was a success, and Myllarguten built himself up a large audience. But in the end of the 1850ies the interest for folk music declined as the era of national romanticism was in decline.

Myllarguten settled down in West Telemark, and at the age of 30 he married Ingebjørg Eddanshaugen. They had 10 children were of three died early.

In 1852 the Millerboy purchased Sudistog Øygarden farm after having made good money playing concerts in Christiania in 1849 and in Bergen in 1850.

He was neither skilled farmer nor competent economist, and as such he had to give up the farm again just over ten years later. He was allowed to keep this smallholding he called Kósi, put up four houses there, and lived there as of spring 1866.

The cabin came from Bronelid, a place west of Lake Totak. He moved the barn (made of birch) and a small storage house with him from Øygarden, and he fashioned a cowshed from an old bath house he found somewhere else.

Six years later, on the 21st of November, 1872, he died as a ppor man. The whole funerary procession fit in a small open boat.

The little farm was left deserted, and fell into disrepair. Just after 1900, the cabin was torn down. What could still be used – some say a single log, and some say more – was brought to Nordjordet farther out in Arabygdi and was incorporated in the building of a new cabin there. This cabin was used as a home until 1958. It was taken apart in 1989 and now serves as an annex at a holiday home at Haddland.

In 1938, the artist and painter Harald Kihle came to Arabygdi. In the journal of the Norsk Bygdekunstlag (Norwegian folk art association) in 1949, he and colleague Kristian Kildal wrote a piece that strongly encouraged the preservation of those mementos of the Millerboy that still remained.

Rauland Bygdekunstlag (Rauland Folk Art Association), led by Øystein Kostveit, accepted the challenge and persuaded Rauland municipality to purchase the land and what remained of the houses and barn from Steffa Øygarden.

It was deemed impractical to use the original cabin from Nordjordet. Instead, they found a similar cabin at Glosimot in Bjålidmarka that had originally been a bakehouse at Nord-Svalastog farm, Haddland.

The practical work was carried out by volunteers. Olav Midgarden, grandson of the Millerboy, made sure everything was put in its proper place as far as they could manage. His brother Targjei Skinand, together with Aslak Øygarden, did the masonry work for the chimney.

The Memorial statue of the Millerboy, made by sculptor Dyre Vaa, was set up here in August 1969.

Guiding in the Millerboy's Home

MYLLARHEIMEN is open for purchased guided tours. You can order a guided tour for groups bigger than 10 persons by calling +47 35 06 90 90 (Museum of Western Telemark) or by sending an e-mail to post@vtm.no a few days in advance.

Entrance fee for a guided tour is a ticket NOK 60,- for each visitor plus a guiding fee NOK 700,-