You are here: Things to Do > Passion for Skien - Prinsessegata 13 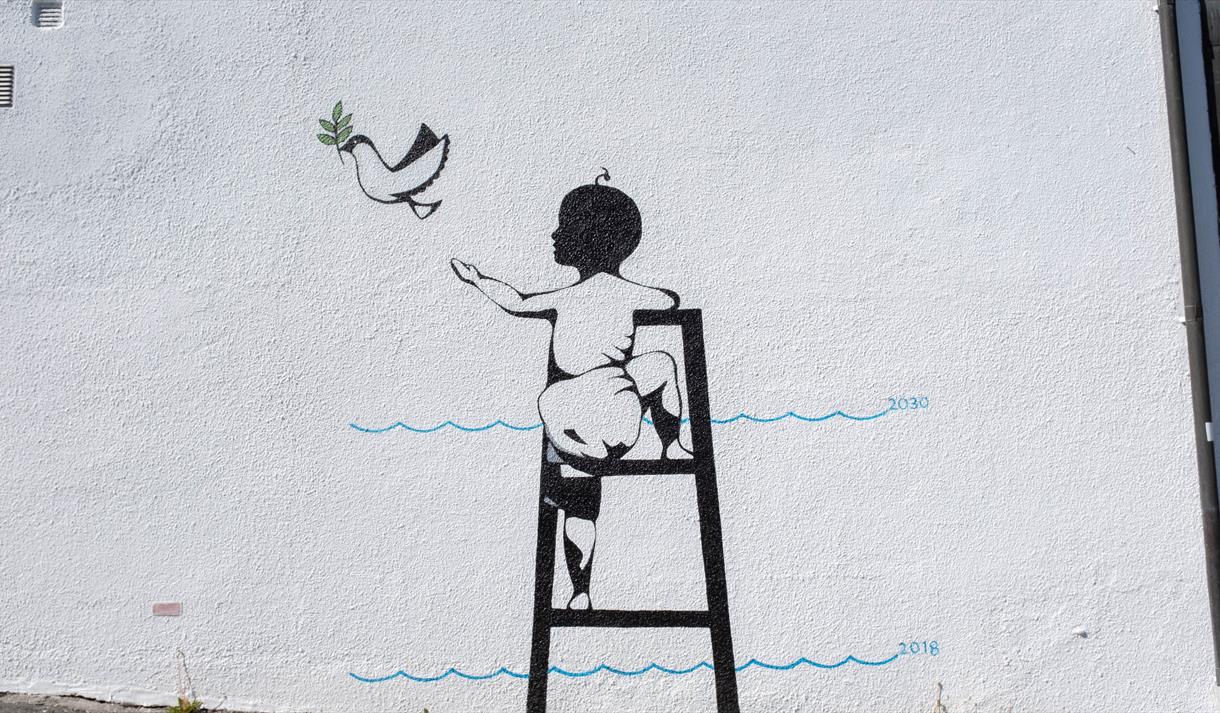 Painting: A simple design with message of safeguarding peace and our nature, and with an indication of possible water level in 2030. Victor Ash is a highly recognized French street artist, originally from Portugal , who lives in Copenhagen.

Technique: His murals show that for him is the main danger to the growing interconnection between the countryside and cities, nature and culture.

Exposure: Victor Ash made his first exhibition in 1989. Since then his work has been exhibited around the world, including in New York, Miami Art Basel, London, Seoul and Tokyo. He is especially known for its giant "Cosmonaut" in Berlin. Victor is a street artist, and often uses the contrast between urban environments and nature as a theme in his paintings.

is baptized "Interstellar Fugitive" and symbolizes people displaced, alternatively, what we may be at risk if we do not safeguard Mother Earth - "saving the planet Hearth."

Artist on The spirit Kunsthall wall is Eric Okdeh from Philadelphia from the United States. Muralist since 1998. BFA in art / painting from Tyler School of Art in the United States. Eric Okdeh is from Philadelphia, Pennsylvania, and has contributed to over 100 public artworks around the US, as well as murals on Hawaii, Spain, Jordan and Sandefjord - and now also Skien.

For 20 years he has worked with social art projects in his hometown of Philadelphia. He uses art as a way to include community groups that have ended up outside, such as disadvantaged youth or inmates serving at life in prison.

Socially engaged, work a lot with art as therapy for people who have ended up outside of society. Eric leads a group of up to 20 inmates to design and create works of art for the city of Philadelphia, as well as in Graterford prison. Murals painted on cloth panels inside Graterford prison and then installed in various locations.

The painting, of logs down to Skien. A big thank you to the timber workers who had a dangerous job, and many of them lost their lives. The picture shows the old bridge over Damfoss, as well as the old buildings along Hjellen and Skien lock on the right side. Eric's wall is describing a part of the history of Skien.