You are here: Things to Do > Into the landscape 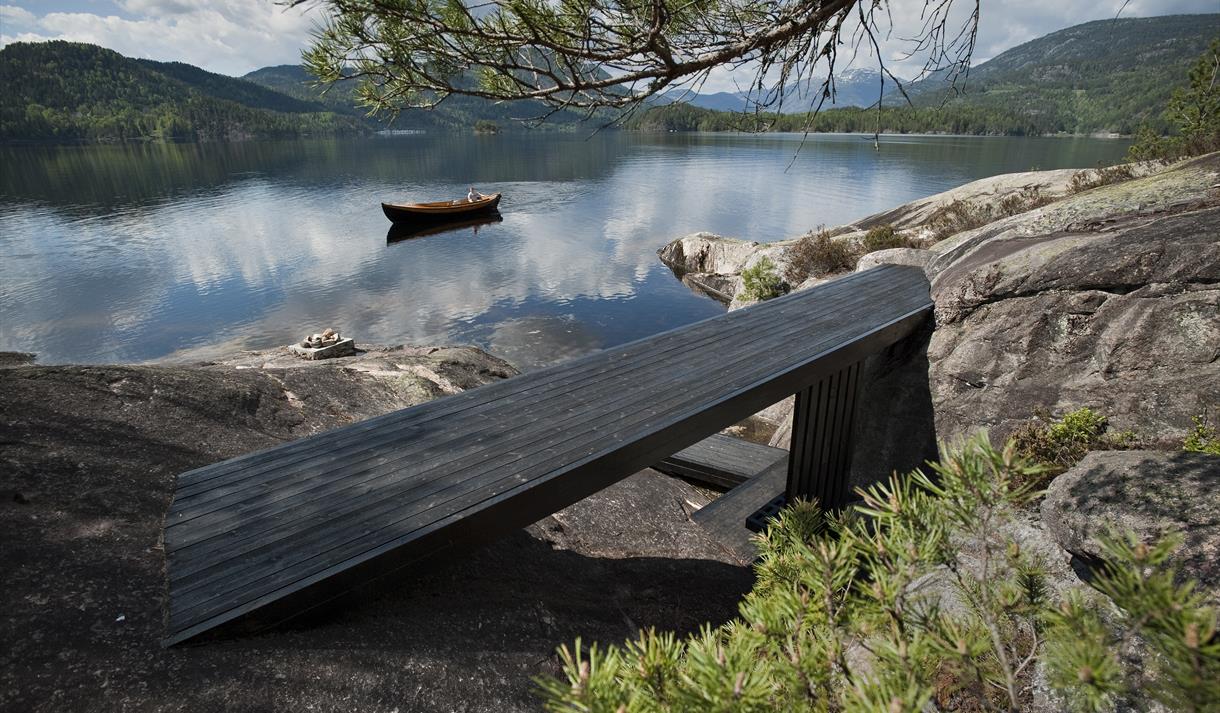 Few final adjustment works have finally brought to completion three wooden costructions along Seljord Lake, in the Telemark district of Norway. The three structures – a sauna, an observatory deck and a shelter for fishermen on the lake shore – have been designed and built
by a group of international students during a 10-days workshop led by Sami Rintala and Dagur Eggertsson in October. The event, Into the landscape, was organised by the Municipality of Seljord in cooperation with the Norwegian Theatre Academy from Østfold University, the Master of Landscape Design of Politecnico di Milano / Naba and the Master of Interior Design of NABA.

Just imagine nature all around, fresh air filled with the subtle smell of wet misty willows, the fragrance of wood penetrating into your mind and soul…. And a sea-serpent ghost hovering about. As soon as we reached the workshop location we were told about the legend of a strange animal living in Seljord lake and often seen by local people and tourists. Of course, this story of the sea-serpent was set aside as a figment of imagination based on mere conjectures but, whatever the case maybe, we worked our structures out keeping in mind the legendary seaserpent. In some way it was expected from us to provide some glimpse of the mysterious beast and to make one feel the magic of the place. The Fishing Point installation seemed the simplest of the three projects, but designing it was quite tricky. The location was right on the bank of the Seljord Lake. The bank was divided into two undulating. Our job was to create a connection between those two levels so fishermen may easily move from one level to another despite the slippery bedrock steep incline between the two levels. The structure was designed in the form of a wooden bridge that acts as a shelter for fishermen. Drilling and wood cutting took a lot of time but we managed to complete the task within two days. Needless to say, it was biting cold especially by the lake and to make matters worse for those who were not used to the northern climate, it was windy too. To set up the fireplace – an essential element for enjoying the pleasure of fishing – we had to make a mortar on our own by mixing concrete and rocks taken from the site. Finally, we painted the wood so as to blend it with the natural mountain scenery. On the 9th day it was great to see our efforts transformed into matter and form; a tiny landmark left
on the heart of Seljord.

Seljord is a small, beautiful town in Norway with marvellous views towards forests, mountains and a famous lake historically told to be hosting a kind of sea-serpent named Selma. The day I arrived on the site chosen for the sauna construction, i didn’t have any clear
idea of what could be done in this uneven area right beside the lake as I had never experienced such a building area. As days passed by i constantly verified my group improvements and i rapidly came to the belief that the foreseen design and the huge amount of work could actually be done. We first started to place stones to give strong foundations to the pillars. Some of the stones were so heavy that our efforts often produced funny situations, despite that the job has never been dangerous. The group was divided into specialized units for different tasks and everyone was committed to a specific result: while some people were cutting the wooden elements to the proper size, others were installing the wood panels and some others were screwing the wood bars to fix them. The teamwork was so quick that we often faced temporary shortages of material. Everyone worked enthusiastically – even under heavy rain – to finish the construction on time and see the results of 10 days mental and physical work. We almost made it! The sauna was
completed on the day we left.

My group’s location was on the top of the mountain overlooking Seljord Lake. Seljord people come to this place to enjoy the beautiful view and try to spot the Sea Serpent. We aimed to design something unique that would not spoil the natural scenery and could be used as a shelter from the quite chilly and ever-changing weather. After a long discussion we came up with an idea of designing six boxes to be installed in a hexagonal shape with a fire place in the middle. We first started to build the boxes. We cut the wood, drilled, nailed and painted them at the end. It was wonderful to see the whole process growing on, from the location inspection to the final opening to the public. This whole task took 9 days to be accomplished. Because of the unorthogonal shapes, it was not that easy to cut the wood accordingly and to fit all the boxes’ sides correctly together, keeping in mind that the structure had to be very strong yet beautiful. But finally, we installed the structure successfully. A warm, welcoming place, just a few steps beside the hilltop, among the pine trees. 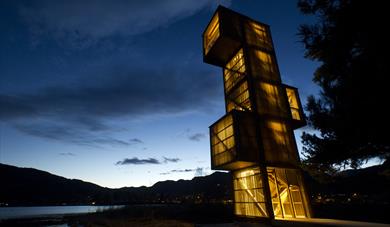