You are here: Things to Do > The Sea Serpent 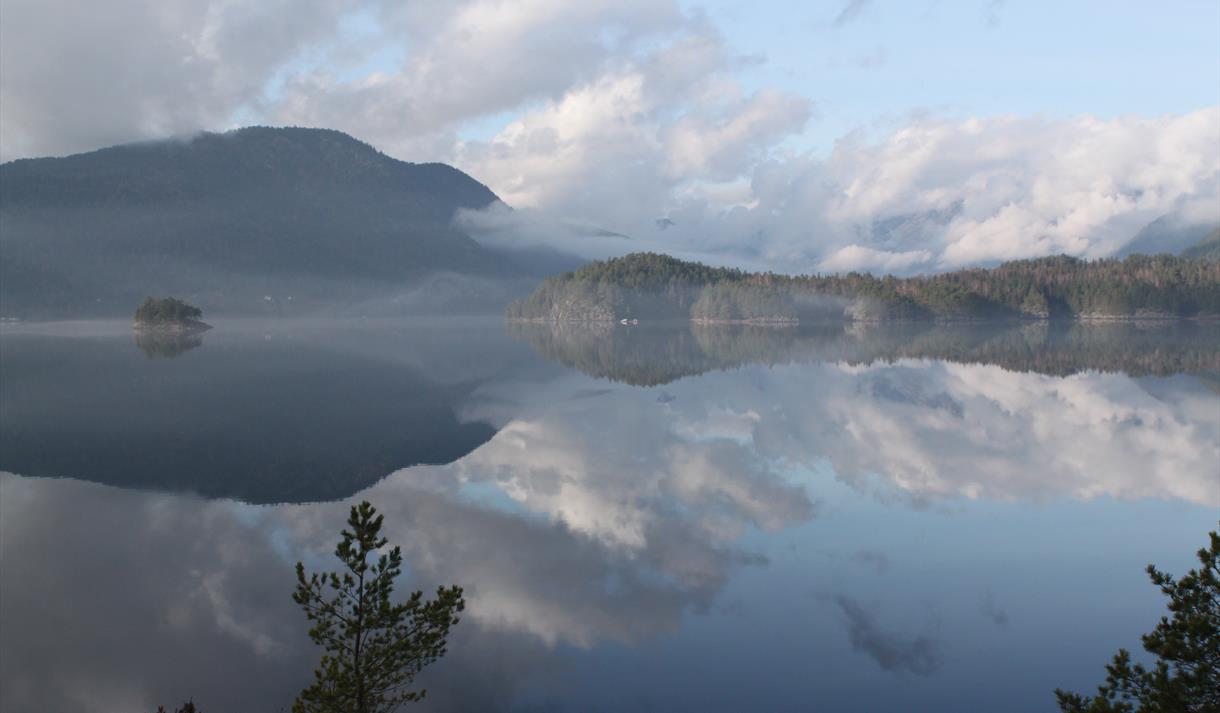 In the midst of Telemark, which has always been associated with fairy tales, folksongs and fantasy, lies Seljordsvannet (Seljord Lake) and it’s great secret. What is really hiding under the blue, friendly surface?

For 250 years, and most likely for a longer period of time, people have claimed to have seen a large and snake-like animal in Seljordsvannet. The first written review dates back to 1750. Then Gunleik Andersson Verpe from Bø had to move a moving mass from Ulvenes to Nes. When he was in the middle of the water, a sea storm appeared to attack one of his two prams and he was choked to death.

The story says nothing about what exactly happened to Gunleik Andersson Verpe. A few decades later, in 1786, Hans Jacob Wille wrote about a strange creature in the book, Description of Sillejord's Priesthood in the Upper Tellemark in Norway. Wille says nothing about the size of the animal, but it "must be very strange, but it's the most poison of all. It moves under the water like an eel, and some years ago it huged a man in his big robe as he bore the barrow Over the Laxhøl River ". Later, several people have claimed that they have rowed at the sea storm, others that they have seen a large animal that has slipped from the beach stones and into the water. Some compare their heads to a crocodile, others to the head of a horse or moose. Others see an animal a few meters away while still others talk about lengths of both 30 and 40 meters. Nevertheless, there are many observations, on average more every summer. Not least in the last decade, there have been many observations, and almost always at the warmest time in the middle of the summer.

Sea serpents are not just a Seljord phenomenon. Sea monsters have been seen practically all over the world, and for the hundreds of years along the Norwegian coast there have been seen large and inexplicable sea creatures. In fact, this coastline is particularly rich in sightings, also in world scale. Olaus Magnus (1500s), Erik Pontoppidan d.y. (1700s) and many others have given in part detailed and dramatic descriptions of what the different creatures looked like. Not least from the 19th century, there are many observations, while from our own century there are also a few. From freshwater there are more local oral traditions from many places in the country, but today it is primarily in Seljordsvannet that people still claim to see inexplicable movements in the water.

The observations in Seljordsvannet raise a number of questions: How likely is there to be a large animal in Seljordsvannet? How could such an animal have come there? And is Seljordsvannet special in any way compared to other medium sized lakes? Some simple facts about the water do not seem to give a clear answer: it's about 15 kilometers long and almost two kilometers wide at the widest. It is about 150 meters deep at the deepest, while the average depth is between 50 and 75 meters. On a Norwegian scale, Seljordsvannet is a rather shallow lake. It can also be mentioned that it is located several miles from the sea.
The science is clear in its view that the Seljordsvannet can not contain a sea serpent (if any), and there are two important reasons for this. Firstly, the size of the water indicates that it is far too small to feed an animal, and preferably a family of animals, ten, fifteen or twenty meters long. Everything you know about what space animals of a certain size need to claim that the Seljordsvannet would be like a cramped little aquarium for a several meter long sea serpent. Secondly, it was only 10,000 years ago that there was no Seljordsvann.

Despite these crucial arguments against the existence of a sea serpent in Seljordsvannet, residents and tourists continue to see strange movements on the water and attention to the phenomenon has not diminished after a major international expedition in the summer of 1998, when the Discovery Channel Bought exclusive rights to cover the search for the worm. Someone might expect the expedition to make sensational findings. That's not how it went. But the analyzes from the registrations made are now available, and they contain more than enough to keep the mystery alive, at least if you have faith.