You are here: Things to Do > Historical Dalen Hotel 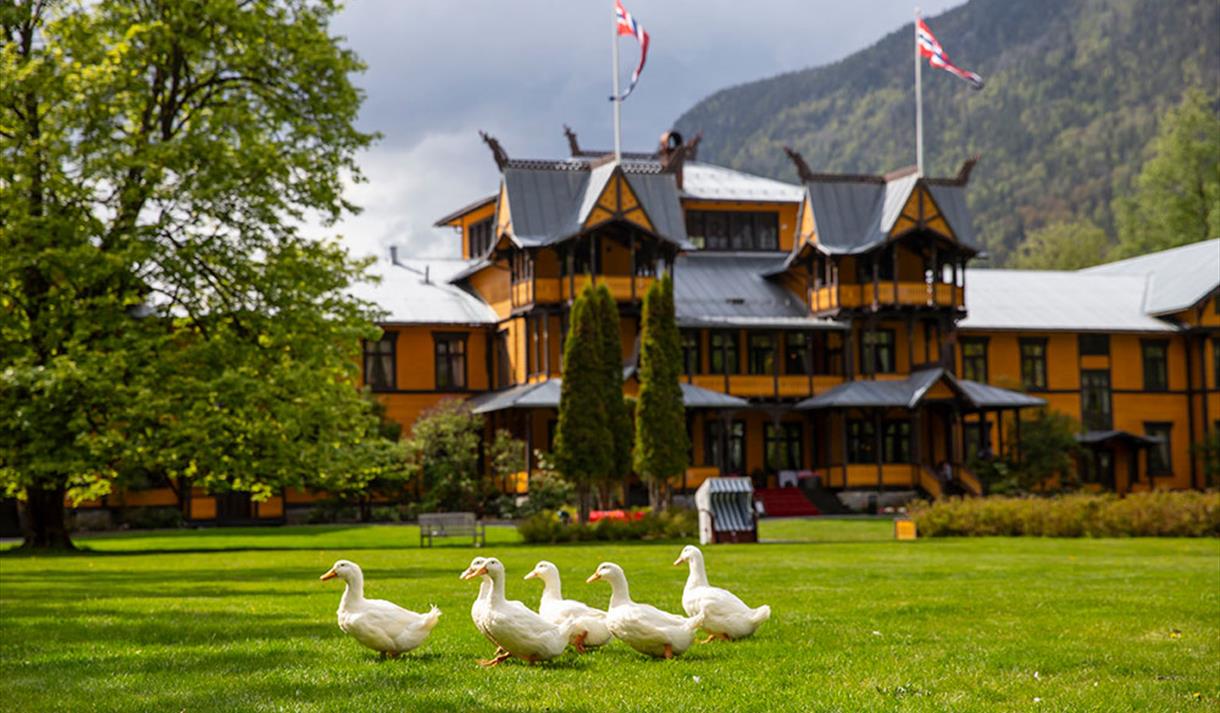 Dalen Hotel is known as “the hotel from the fairytales”. It was opened in 1894 in a grand romantic style with dragon heads, towers and spiers, balconys and cornices.

The hotel is open from mid April to October every year. For more information about the hotel, please click here.

The history
Due to the Telemark Canal tourists were already in the 19th century visiting Dalen in high numbers, however, Dalen did not have a high end hotel to cater for the rich and prominent guests. Inspired by as well stave churches as vikings the hotel was finished in 1894. It became widely known in Europe and had many visitors from the aristocracy. King Oscar II is known to have visited, so did emperor Wilhelm of Germany and king Leopold II of Belgium. The Norwegian king Haakon VII and his queen Maud also stayed at Dalen Hotel® with their son, crown prince Olav.

During world war II the hotel was occupied by German forces. Beautiful interior was removed while the buildings deteriorated. The known preacher Aage Samuelsen believed in the future of the hotel. He bought it, but he did not succeed trying to raise fundings for refurbishments. He did, however, bring the hotel a lot of publicity and PR. In the late 80’s comprehensive refurbishments were started, and the hotel re-opened in 1992.

In 2000 Dalen Hotel® was awarded a silver medal, the highest distinction of the Europa Nostra, the European organisation for preservation of cultural heritage, for the effort put into keeping the hotel as a unique cultural icon. The Norwegian organisation, Norsk Kulturarv, has also awarded the hotel ‘Olavsrosa’, a quality mark with a strong profile in the marketing of Norwegian cultural heritage to the public. “Olavsrosa – our best experiences” defines high goals for product quality and the maintenance of all parts of the product. The directorate for cultural heritage has described Dalen Hotel as the most powerful and magnificent, and as the best preserved,  of all old Swiss style hotels.

The history of Dalen Hotel® also tells the tale about Miss Greenfield, an English lady arriving at the hotel at the end of the 19th century. Alledgedly she gave birth to a child in room 17 before returning to England without noticing anyone at the hotel. The door to her room was blocked, and after forcing themselves into the room, the hotel staff found a dead newborn child. The story does not tell whether she killed the child herself or if it was stillborn, however, she ended up facing a trial in England. Before the start of the trial she commited suicide, and up till this day she continues to restlessly wander the premises of the hotel. It is said that escpecially men staying in room 17 can feel her presence and that you should not place anything in the cradle in her room.

The hotel and the Telemark Canal have, due to extensive upgrades and refurbishments, regained their position as one of Norway’s most unique travel experiences. Today visitor numbers are strong and increasing, including as well domestic as international tourists.

The fastest route between Oslo and Bergen
Due to the Telemark Canal Dalen became a geographical center, as this was the fastest route between Christiania (Oslo) and Bergen. Tourism flourished as early as 1892 at the opening of the Telemark Canal. Norway was an exotic and exciting destination, however, Dalen lacked a high end hotel for the rich and prominent. Inspired by our stave churches and with elements from the viking eras, Dalen hotel was raised and opened 1894. Hans Larsen, a wealthy business man from Skien, brought the initiative together with Lars Rød, a wholesaler, also from Skien and Anton Hansen, a merchant from Porsgrunn. They were accompanied by the architect Haldor Larsen Børve from Ullensvang. He had been educated in Germany as a so called “Hannoveraner” and had a preference for Swiss style houses.

Royalties and prominent guests
From the day of the opening the hotel had the appearance of a grand estate combining European wooden architecture with the Norwegian dragon style. It was the start of a prime period. “A castle”, surrounded by dragons and spiers, of mystery and grandeur. The hotel received as well royalties as locals. The English aristocracy started arriving. So did king Oscar II of Norway and Sweden, the king of Siam, emperor Wilhelm of Germany and king Leopold of Belgium. Norwegian king Haakon VII with his queen Maud and their son, crown prince Olav also stayed here. It became an arena for prominent guests from all over Europe. For half a century they hosted balls and waltzed through joys and sorrows, war and peace.

Åge Samuelsen
The well known preacher Åge Samuelsen believed in the future of Dalen Hotel. He bought it, however, he did not succeed trying to finance refurbishments. On the other hand he provided the hotel with valuable publisity and PR, and through his efforts, after his death there was a significant interest to invest in preserving and developing the property.

Renovation
In the late 1980s a decision was made to attempt a full refurbishment of the property, and after a total renovation the hotel re-opened in 1992 with high ambitions. In 2000 the renovation was honored with a silver medal from the Europa Nostra, the European organisation for preservation of cultural heritage. 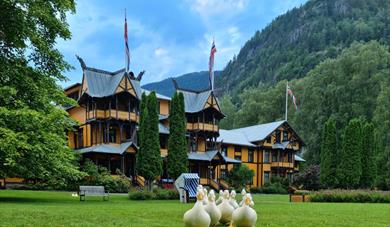 Dalen Hotel, TokkeDalen Hotel is a fairytale hotel from 1894, in a sumptuous, romantic style and one of Norway's oldest wooden hotels, located only 400 m from the Telemark Canal. 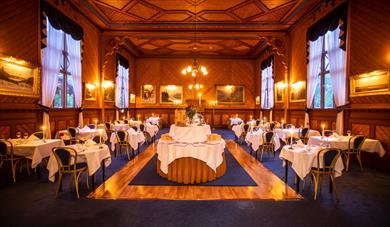 Restaurant Bandak Dalen Hotel, TokkeAt Restaurant Bandak, hospitality and food experiences are the focus. The menu is French-inspired with use of local and Norwegian ingredients. 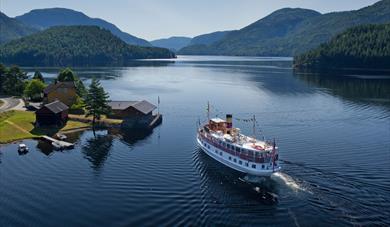