You are here: Information > Product Catch all > Kragerø town centre 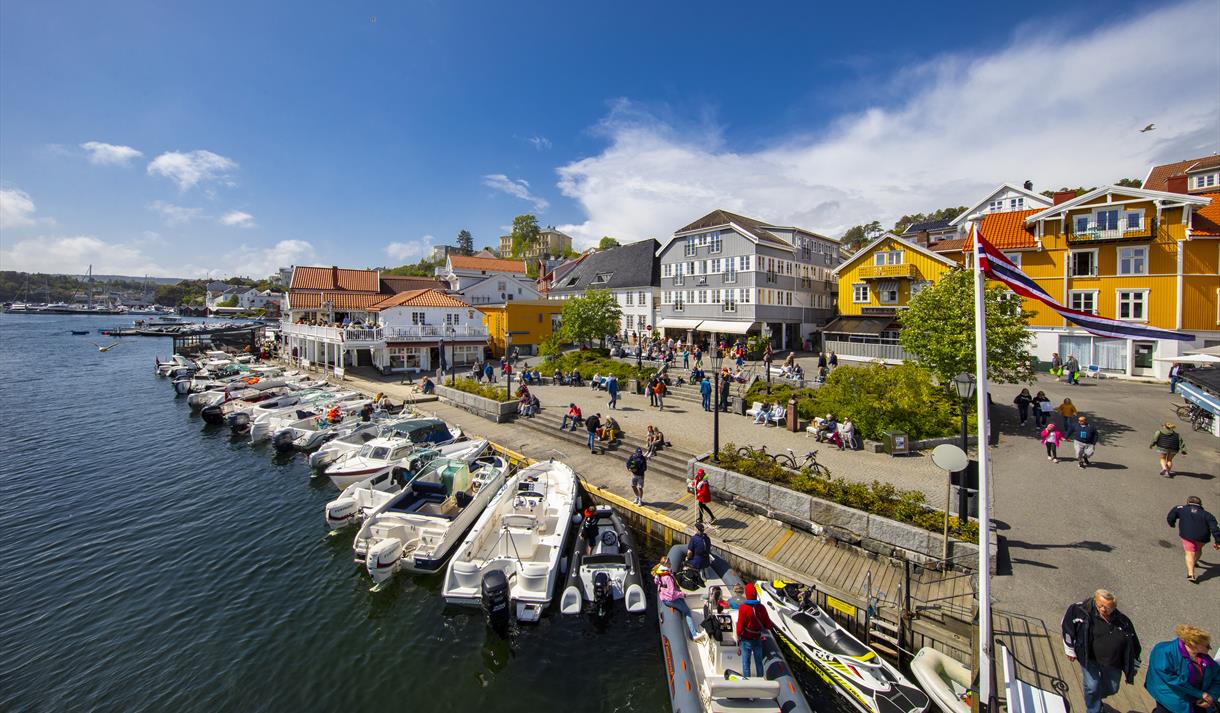 The Kragerø city centre is an exciting mix of cafes, shops, galleries and restaurants. Here you will find unique shops specializing in everything from shoes and bags to interior design and art. Go exploring in the narrow alleys among white wooden houses and green gardens. Kragerø has a rich cultural program, with festivals and concerts all year through!

Along the harbour of Blindtarmen you will find several restaurants and pubs to dine, where everything from italian to sushi is on the meny. How about homemade sausages from the meat shop Brødrene Brubakken or lobster from the fish shop and a delicious homemade ice cream "Skaarups Is" for dessert?

The special light here on the coast has inspired many artists to come to Kragerø, such as Edvard Munch who paintet his famous "The sun” here. In the middle of the town center you will find The Kittelsen House, Theodor Kittelsen childhood home. From there you can join guided Munch and Kittelsen walks throughout the summer.
Kragerø extends down to the harbour, and there is a short walking distance to great recreational areas as Gunnarsholmen and Sjøbadet with beaches and swimming possibilities.

The cultural offer in Kragerø are many; there are festivals, farmers' markets, and concerts throughout the year.

History of the city centre

Kragerø town as we know it, was built after a big city fire in 1711. The first settlement in Kragerø was most likely built on Øya before it was expanded to the mainland where the city centre is today.
Kragerø’s mainland was originally much smaller than it is today. Large parts of the city center are built on stones that came with sailboats, especially from England and the Netherlands.
Many places in the city, significant families from history have given names to streets and areas. Examples are Biørnsborg Park, Barthebrygga and Thommesheia. In the center, the city’s merchants and their families lived, along the Barthebrygga, the city’s most wealthy lived, while the Andølingen and Jøransberg was working class areas. Several of the city’s workers came from other parts of Telemark to work in Kragerø, and with them they had the timber from their houses numbered. Several of the houses at Andølingen and Jøransberg have originally been elsewhere before they were rebuilt in Kragerø.
The city was built at a time when most people wanted to live in the city center, and therefore it was built tight to accommodate everyone. Kragerø’s narrow streets and alleys are an excellent proof of this, and over 350 years later, the city still has its original charm.