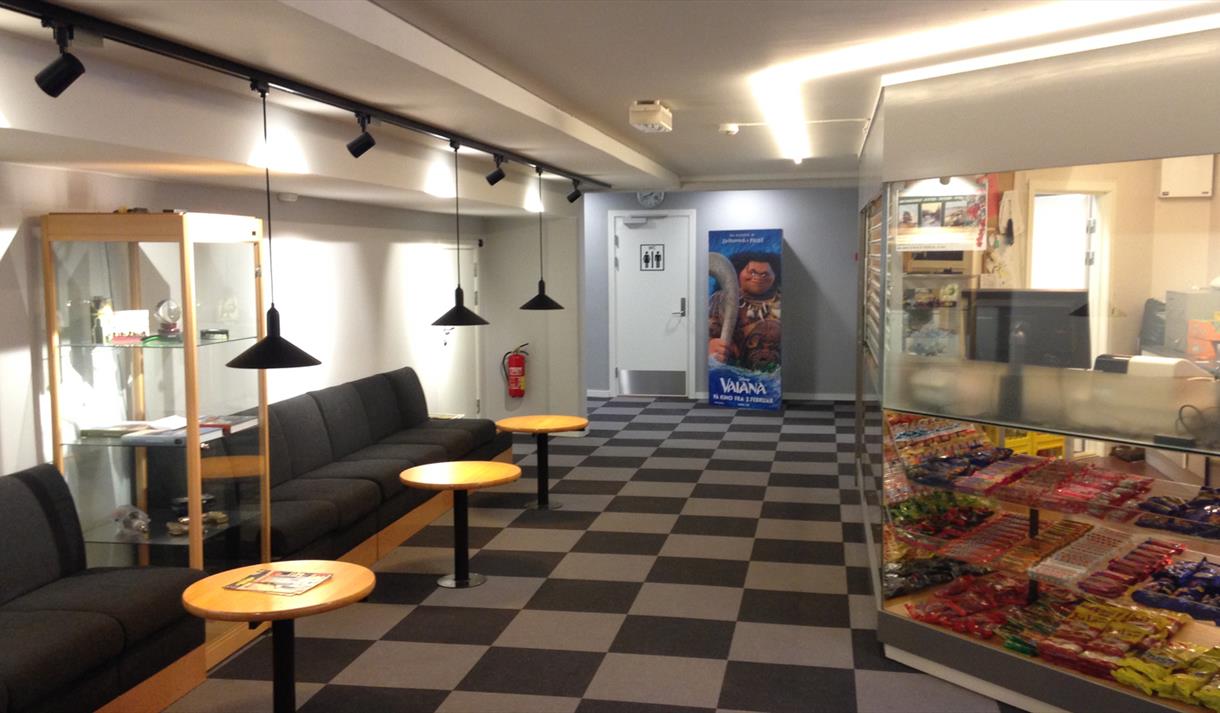 Kragerø Cinema is located in Gamle Kragerøvei 4, in a distinctive functionalist building from the 1930s, located between the Kragerø Church and the Police central. The theater has 172 seats, a digital projector with Dolby 3D. For a selection of movies we have Dolby Atmos! For program click here!

Buy tickets
You can either buy your ticket in the ticket gate half an hour before the screening, and until the last film is running, or on the internet from up to one week in advance. We're unable to take orders pr. phone or email! Tickets purchased online will not be refunded.

About us
Kragerø Biograf is also host for other events and concerts like the Kragero Childrens Theater and it is possible to celebrate your birthday by hiring the cinema.

Some history
Movie screenings has remained unchanged for over a hundred years, as it has droped a translucent image in front of a strong light source, specifically 24 fps, allowing a regular movie consisting of three and a half kilometers pictures and a weight of 25 kg. Kragerø managed to be among the first to show films, from 1904. We know that Oslo got its first permanent cinema in the autumn of the same year, and we can see the possibility that we were a few months earlier there ... . Those who have seen the classic Cinema Paradiso know that old nitrate films were highly combustible material, and Kragerø cinema was also completely destroyed in a fire. Now both building and films are far more secure, after reconstruction of the site and worldwide transition to fireproof movie rolls. The old hall with a flat floor and a gallery was later converted into an amphitheater, with better visibility to the canvas, even though one did not sit so well ... . We got a new sound system and new machine with 4000-meter coil in 1984, and we upgraded audio, canvas and chairs in 1998, and now the cinema has good legroom and good digital surround sound. And with space for theatrical scenery or an estrade behind the screen, ready for the next local show. In recent years it has been worked intensively with the introduction of digital cinema (D-cinema) worldwide. In Norway all the 420 movie theaters now have digital equipment.

18th of May 2011, we had digital world premiere of Pirates of the Caribbean - On Stranger Tides, and a full theater almost got Johnny Depp on their lap. Therefor we are able to show all kind of new movies released when we want to. We have chosen Dolby 3D, a system that has proven reliable and easy to operate. We lend glasses at the entrance and they must be returned. They can not be used anywhere else than where the same system have been installed.

We wish you a pleasant movie experience!